The Pinnacle – A Spinster’s Folly

Dorset’s Pinnacle Tower and a few ancient trees are all that is left to tell the story of Miss Cecelia deNottbeck, great-grand daughter of John Jacob Astor and a descendent of Finnish nobility. Cecelia’s life was touched by tragedy, beginning in 1891 with the loss of her father. General John deNottbeck, New York Consul representing Czar Nicholas of Russia, met an early death when he and his wife, also named Cecelia, were out on a pleasure ride in Central Park. Many witnessed his horse become unmanageable and then bolt, eventually unseating its rider despite his best efforts to regain control. He died from his injuries shortly thereafter. Mrs. deNottbeck, bolstered by a devout Lutheran faith, then took her three children, Gabrielle, 11, Cecelia, 7, and Peter, 2, to Europe, where they received their educations, mainly in England and France. The family would also visit relatives in Russia, where Cecelia later recalled to a friend how her uncle would not allow her to be presented at court because of its ‘low morality.’

Cecelia’s later childhood must have been one of relative ease and comfort. She remembered fondly her time as a student in the bucolic English countryside; perhaps it was the peace and contentment she experienced there that allowed her to blossom into a young woman of strong Christian faith. However, the idyll was shattered when her brother and sister were declared insane. Mrs. deNottbeck cared for them until it became too difficult for her to manage; they were finally placed in a private asylum in New York. Cecelia and her mother moved back to the City to be near them, but her mother, overcome by guilt, eventually took a suite of rooms in the asylum, leaving the family home to Cecelia. Around the same time, Cecelia began working at the New York City Mission, where she met a kindred soul in Harriet Edwards. The two decided to look for a place to spend the summer away from the city where they could be inspired by Bible teaching in some verdant place. It was on a trip of exploration that Cecelia discovered, and fell in love with, the Dorset Valley. Parson Pratt’s ‘excellent sermons’ at the Dorset Church urged the two to take temporary lodgings with friends. It was some years before Cecelia sought to purchase her own property; in 1892, she purchased a farm of 74 acres, which encompassed the Pinnacle. 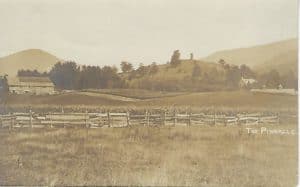 Back then, Dorset’s hills were different from the thickly forested ones of today. Earlier sheep farming had denuded much of the landscape; it must have looked very much like the classic English countryside Cecelia sought. The only thing missing was a crumbling ruin – perhaps of a castle! Garden follies – structures whose only use was to be decorative – were fashionable at the time, and one likes to think that Cecelia must have taken great joy in the whimsey of having one of her own. The Tower was the very first structure she had built on her newly acquired land. It was not until 1895 that she had a fine manor house built nearby, with running water and electricity, as well as at least one other folly – a separate dwelling for the elaborate dollhouse she enjoyed sharing with visiting children.

Miss deNottbeck, who never married, eventually owned hundreds of acres between the Dorset and Kirby Hollows, west to the Mettowee River. Gravel roads were installed throughout so that she, her companion Miss Edwards and their friends could traverse through the woodlands around and leading to the Tower, where they liked to read, picnic and enjoy the idyllic scenery. A neighbor’s cattle kept the surrounding area clear.

Another of Cecelia’s favorite pastimes was leisurely carriage rides complete with full livery and a coachman in top hat. Whenever she saw a particularly beautiful tree, she would ask the coachman to mark it with a ribbon, and then dispatch a man to purchase it from the landowner. The full-grown trees and the holes for their future homes were dug out in the fall, then hauled in the winter by teams of horses and a large apparatus with two large wheels and a pole. The trees were chained to the pole and pulled upright against the frozen ground into position. To this day, a sharp eye can spot the gnarled remains of some of them still skirting the footpaths that crisscross the area. As Miss deNottbeck’s holdings grew to encompass a very large, park-like property, she allowed others to enjoy it, but insisted on being asked permission in advance. Those who did not were quickly escorted from the premises. Today, anyone is welcome to enjoy the short walk to the Pinnacle Tower, although few know its mysterious history. It is all that is left of Cecelia’s once-substantial estate and her summer home of 50 years. The manor house fell into disuse after her death in 1933, and was eventually torn down.

Now a popular recreational destination, the Pinnacle is a 42-acre parcel owned and managed by the Town of Dorset. Work has been done by the Conservation Commission to preserve the crumbling Tower, create a parking area and install trail markers. It’s located on Pinnacle Lane off Route 30, just north of the Dorset Village Green. When you go, try to remember the Victorian spinster whose vision of paradise created it!