In 1796, The Dorset Inn welcomed its first guests – travelers en route to the major markets in Boston and Albany. After tethering their horses at the Inn’s front door, they would pass an evening before the fireplace of the Inn, eat a hearty supper and retire to the four poster bed.

The New England Village Green was the center of town activity. In Dorset, the Green Mountain Boys planned their exploits against the British in 1775 at the Green before riding off to rally their compatriots. It was on the Green where the parades started or a game of tennis or croquet could be played.

In the summer of 1918, Inn proprietor Amy Ann Lapham added new guest rooms by raising the roof over the ballroom. The Inn provided lodging for 35 guests, mostly “city dwellers” who fell in love with the area’s beauty and charm. Guests would stay for weeks or months at a time. Excursions to Mt. Equinox, Downer’s Glen, Lake St. Catherine, the Marble Quarries and Mt. Antoine were favorite pastimes.

For the first 100 years, the chef relied on the Inn’s backyard population of chickens, cows and the vegetable garden for the ingredients in each day’s meals. Later, the neighboring farmer supplied fresh Vermont milk and cream while Thomas Hanley’s general market was the source for poultry, meat and vegetables. At the Dorset Grist Mill, established in 1876, grains for baking and the country’s only source of granola were purchased for patrons.

Now completely refurbished, The Dorset Inn is renowned locally and nationally for its gracious, welcoming atmosphere and exceptional cooking. Careful attention to the finer details in restoring the Inn are in evidence throughout the historic building: period furnishings and new carpeting and wallpaper amidst well-preserved architectural details in the Inn’s common rooms including wide pine board floors in the living rooms, the restored tavern and the pronounced character of the candlelit dining room. Now and for the past century, Dorset has attracted writers, artists, sports enthusiasts and vacationers to its high meadows, hardwood forests, golf courses and clear, trout-laden streams. 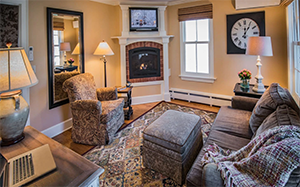 Take advantage of our special mid-week promotional rates to stay in a two room luxury suite with king bedroom, spa bathroom and your own private sitting room. Stay Sunday through Thursday nights for just $280 per night, per couple. Even sweeter, the rate includes breakfast each morning!