Hang Your Hat at The Dorset Inn 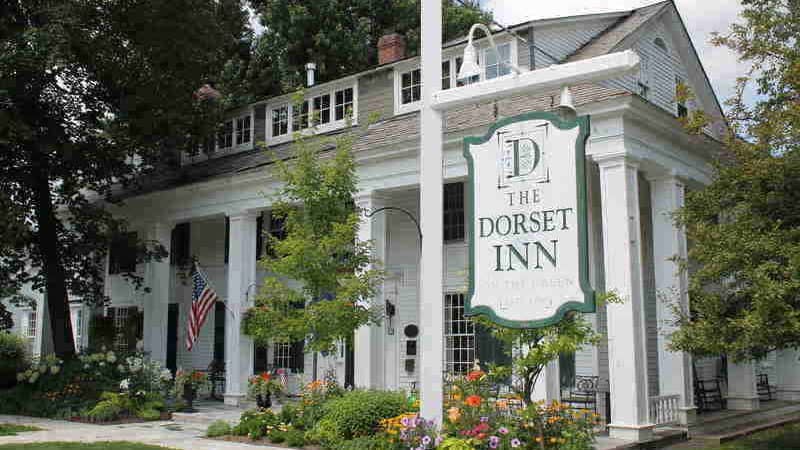 The Dorset Green looks like something you’d find on a postcard. The houses and stores that line either side of the strip are uniform white, trimmed in dark green or black. The Dorset Inn, a three-story, pillared building with marble steps and sidewalk harvested from the nearby quarry, immediately catches your eye – and not just because it’s the first thing that greets you.

The Dorset Inn has managed to maintain its quaint, New England inn style, rich history, and comfortable, contemporary feel. Without having to step foot inside, it’s clear why the inn was previously named a “Top 10 Best New England Historic Inn” by Yankee Magazine.

The Dorset Inn opened in 1796 and is Vermont’s oldest continually operating inn. Back then it was known as The Washington Hotel, and travelers just passed through, tethering their horses to the inn’s front porch before resting overnight. For the first 100 years of business, the chef relied on the livestock and fresh produce from the inn’s backyard to feed guests.

During the summer of 1918, the inn’s owner Amy Ann Lapham added guest rooms by raising the roof over the grand room. Back then, the inn could hold just 35 guests. It was mostly people traveling to Dorset from the city who fell in love with the region. Many would stay for a week. Some stayed for months.

In the 1940s, Fred Whittemore became owner of the inn and also served as manager. Then came Sissy. Sissy Hicks owned and operated The Dorset Inn for more than 25 years. After she sold the inn in 2008, she opened Sissy’s Kitchen in Middletown Springs.

A stay at The Dorset Inn is the quintessential Vermont experience. You walk in and you immediately feel welcome, almost like you’re home. For more than 220 years, The Dorset Inn has provided that traditional New England hospitality. It’s why visitors who started coming as children themselves return each year with their grandchildren, or why locals flock to grab a bite to eat.

Owners Steve and Lauren Bryant have maintained the well-preserved architectural details of the building, with its period furnishings, wide pine board floors, cozy tavern, and historic red candlelit dining room. They welcome nearly 9,000 guests each year. Many rooms at the inn are dog-friendly. Bring your four-legged companion with you; The inn provides an LL Bean pet bed, bowls, and a bag of treats.

The Bryant’s are co-owners of The Publyk House in Bennington, The Mountain Top Inn & Resort in Chittenden, The Lake House Pub & Grille on Lake Bomoseen, The Old Gray Barn in Rupert, as well as Dorset Bakery and Barrows House.

For the first 100 years of business, the chef relied on the livestock and fresh produce from the inn’s backyard to feed guests. Today, the Inn provides what can best be described as elegant (and delicious) comfort food. They describe it as “uncomplicated, bistro-style cuisine that demonstrates classic culinary techniques and traditions with regional influences.” Dinner is served nightly in the Inn, and the tavern – with its award-winning wine list – is also open to the public.

The menu changes to showcase Vermont’s seasons, using fresh ingredients that are locally sourced when possible. This includes smoked ham from the Wallingford Locker, located about 20 miles north of the Inn. It isn’t your typical hotel restaurant.

The most loved dish on the menu might have to be the turkey croquettes, which remain a mainstay on the menu from when Sissy was in the kitchen. They’re iconic in their own right.

Did we mention they serve cheesecake made by nuns? If that’s not reason enough to visit, we’re not sure what is.