Dorset Historical Society—Dorset Way Back When 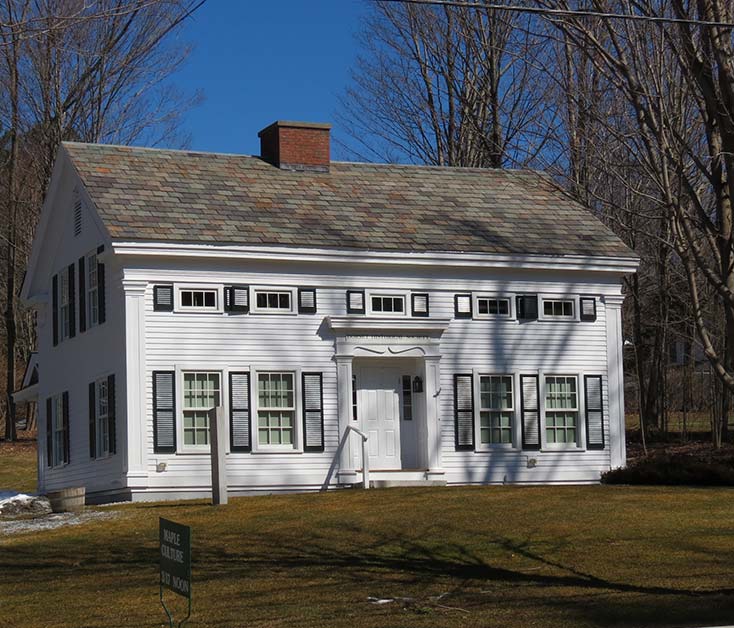 By Liz Schafer. Above, The Bley House Museum, home of the Dorset Historical Society.

When you ask Jon Mathewson about his job as curator for the DHS (Dorset Historical Society), he talks a lot about synergy. He credits a list of volunteers with running the show at the organization’s Bley House Museum. Folks of all ages, including local business people, retirees and students, serve on the board, act as docents, catalogue projects, help prepare exhibits, plan events, and otherwise help with weekly functions.

Mathewson, who shares in these tasks as well as in developing new exhibits and researching/managing acquisitions, also fields inquiries from the public. Many are genealogists seeking answers about their family histories. Some call or email, and many drop in unannounced. He especially enjoys speaking with older people, who often bring a new perspective. “They’re always interesting,” he says. “We know Dorset today, but they knew Dorset way back when.”

“We get a lot of them during the height of summer,” he adds. They come from near and far, every week. Often they come as strangers to each other and leave as acquaintances—even distant family members—when they discover some distant connection from the past: a long-lost cousin; a mutual neighbor; a classmate. If Matthewson doesn’t know the answer to a question—and he knows a lot, just off the cuff—he knows who to ask, or where to find it among the archives that are stored in an untold quantity of large boxes filled with family diaries, business ledgers, letters and more.

The Museum building was left to DHS by artist Elsa Bley when she died in 1990; it had been her home for 45 years. And like Bley, who originally came from Scarsdale, it migrated from New York State. Built in Hebron sometime around 1840, it was relocated to Dorset Village in 1928. DHS moved the building again in 2005/06—this time, only 30 feet—and undertook major renovations as well, including the installation of a new basement.

Ongoing exhibits feature artifacts, photographs and more on Dorset’s settlement and early industry. One room dedicated to the marble industry includes an impressive relief map created by local history buffs showing the area’s rugged terrain and the locations of former mining quarries. Visitors can also view works by acclaimed Dorset artists and local artisans, as well as documents, books and other relics of the past. Numerous photographs show the citizens of Dorset going about the business of life way back when. New exhibits are mounted five times a year, and remain on view for 12 months. (This year’s new exhibits will open on June 4 with a reception from 9am to 1pm.)

Most of the Museum’s holdings come as donations from supporters, through estate behests and as a direct response to the DHS Newsletter’s ‘Lacunae’ column, which puts out thrice-yearly appeals for certain items. “History is always happening,” he says, explaining that every donation yields a new understanding of Dorset’s past. DHS has a small budget for acquisitions funded by its annual allotment and fundraising activities. And Mathewson is quick to give a nod to Museum benefactors who will purchase worthy items priced beyond that. He adds that he’s always looking for things to add to the collection, but sometimes they find him—a number of connoisseurs will reach out if they find something interesting relating to Dorset’s past.

“DHS has been in constant motion for the last 59 years,” he says, adding that next year they’ll be celebrating its 60th anniversary. “There’s never been a period of inactivity. We’re always collecting and interpreting and keeping up with the times and what people want for programming and exhibits.”

One of the most popular programs is the DHS Lunchtime Lectures which take place at 12 noon the third Thursday of every month but December, when local personalities and regional experts cover a wide range of pertinent topics over the course of an hour or so; guests are invited to bring a bag lunch; drinks and desserts are provided. Other events include an annual Ice Cream Social, open houses and guided hikes to some of Dorset’s defunct quarries. Mathewson also points to the DHS interactive website, where visitors can see a Calendar of Events, view videos, search an online database, peruse maps and read the DHS Newsletter. To find out more, including Museum hours and the lineup of speakers for the lecture series, go to dorsetvthistory.org.