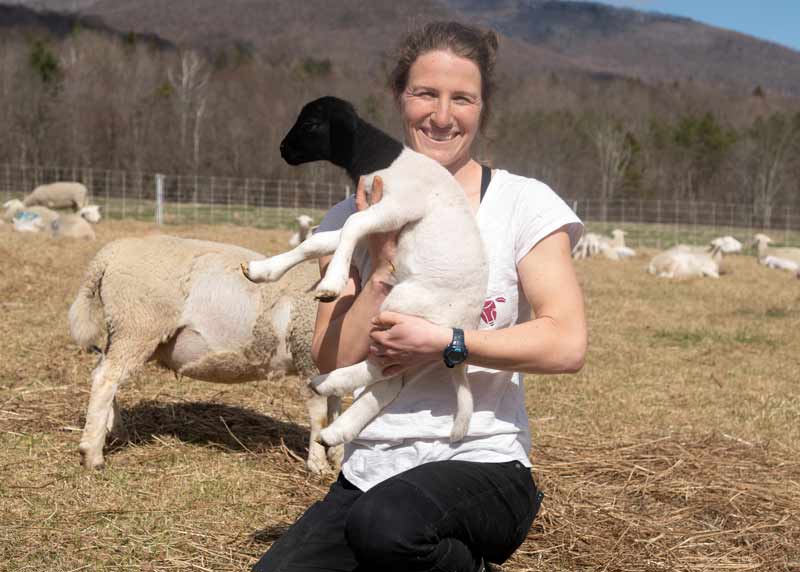 An interest in environmental issues while a student at Burr & Burton Academy (BBA) is what led Mara Hearst of Levy Lamb to farming. Climate change was a rising issue in 2008, and as she and her classmates learned that improved agricultural practices could be a huge part of the solution, Mara wanted to know more about it. She approached the school’s headmaster, Mark Tashjian, with a novel idea: could she earn credits in her senior year working on a farm? No such programming yet existed at BBA, but Tashjian gave her the go-ahead, and Mara spent the year working for a small vegetable producer in Londonderry.

That experience led her Evergreen State College in Washington State to study sustainable agriculture. But, after a year at Evergreen, “I felt like I could learn more about farming by working on farms, rather than by taking classes,” she explains. At first, Mara had been thrilled to leave Vermont; like many young people, she was eager to see the wider world. But as her interest in becoming a farmer grew, she realized the benefits of returning to her native state. “I thought, if I was going to start a farm, it felt like Vermont was the right place to do it.” she recalls.

When Mara returned home, she contacted Scout Proft of Someday Farm, her family’s source for Thanksgiving turkeys for many years. When she asked for a job, Proft was more than happy to take her on. Mara volunteered her time at first, and stayed on for several years, inspired by Scout’s encouragement and passion for producing food. Her mentorship is what led Mara to participate in a pilot program with the Northeast Organic Farming Association of Vermont called CRAFT (Collaborative Regional Alliance for Farmer Training). CRAFT’s mission is to provide hands-on educational experiences to those interested in becoming farmers at a variety of locations across the state.

After working for a few years, Mara realized that in order to have her own farm, she’d need to understand more about the science and business of farming, and enrolled at the University of Vermont (UVM) to complete her formal education. Her self-designed major included the study of plant and animal science along with courses in entrepreneurial business. “I am so glad I went to UVM,” Hearst says. “Now I have connections all over the state.”

Becoming established in stock farming takes time, she points out. And although her goal is to own her own acreage eventually, she says that it’s been fun working with landowners in the area. Her sheep get to enjoy a healthy natural diet while improving the soil on those properties where they graze.

Mara credits her many supporters and mentors for helping her sustain her vision. Levy Lamb’s base location is leased from Henry and Robin Chandler on Danby Mountain Road. “I love having the farm here in Dorset. There is good energy in our farm community…there are so many young farmers besides myself, people who are interested in high-quality foods…I’m excited to be a part of it.” 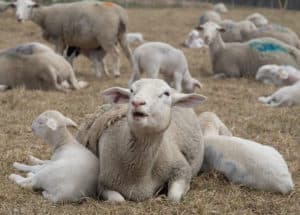 Mara’s sheep are Dorpers, a hardy breed that thrives on a grass diet and don’t need shearing. During grazing season, they are moved daily between paddocks of about two thirds of an acre that Hearst sets up with solar chargers and netting. This practice assures that the plants the sheep are feeding on have a chance to regenerate and minimizes damage to the structure of the soil. “Sheep are low impact. I’ve been committed to grass-fed since the beginning because responsible grazing can actually improve the land, instead of just using it,” she says.

During lambing in early spring, Mara checks in with expectant ewes every four hours. It’s her favorite time of year, despite the extra time involved. She estimates that by the time grazing season has begun, her flock may include 90 animals.

As busy as she is, Hearst has other jobs. In addition to having a few bookkeeping clients, she continues to be involved with CRAFT, helping to coordinate the farmer training program. She’s also worked in the produce garden at SoLo Farm and Table in Londonderry. The restaurant is her anchor customer, she says. “They love having a source for humanely raised fresh lamb, and they do some very creative dishes with it.”

When asked about the name of her business, Mara says that Levy is her middle name. And quickly adds, “It was also my grandmother’s maiden name. She died the same year I started the business in 2018. She traveled the world as an adult, and coincidentally, built up a beautiful collection of sheep figurines from the places she visited. Sheep are the planet’s oldest domesticated animal; they’re everywhere.” She adds, “I inherited a few of the figurines but I have no interest in having the full collection.” That’s not surprising when she has so many of the real thing!