Terry Tyler – A Man About Town

If you pull up a stool next to Terry Tyler in one of the area’s local eateries, you’ll notice a neatly dressed man with a quiet, gentlemanly demeanor. If you strike up a conversation, you’ll most certainly enjoy his humility and wit as he shares some personal anecdotes. What may not be immediately apparent is that he is very accomplished – and has the kudos to prove it. He was recognized by the Vermont State House of Representatives in 2019, and has been featured locally on television and in print.

Tyler has served the community in a variety of civic roles, often for years at a time. His longest stint, 22 years, was as town constable, a job he performed in the evenings after his day job. (He and his wife, Helen, started Tyler Electric & Security in 1958 from the back of their 57 Chevy.)  Over the years, their home became a stopping-off place after incidents for emergency personnel who knew they’d be warmly greeted. Tyler is quick to remark on Helen’s patience, saying there’d often be four or five calls a night.

Helen, who was an active volunteer, passed away in 2019 at age 93. Terry continues to live in the house they built on West Road, and where they raised their two sons. He recently had a second garage built closer by. “My balance is not so good these days,” he admits. “I’m pretty tall; if I fall from this height, I’m gonna do some damage!”

Terry has always had a keen interest in history. He helped establish the Dorset Historical Society in 1963, and has been a member of its board off and on ever since. “I’ve been president a few times. You can only be involved for six years straight and then you have to take a year off,” he says.

That same year, he was also involved in founding the Dorset Visiting Nurse Association, presenting some of his stories in a fundraiser held at the Playhouse. The event raised $4000, an amount that still seems to surprise him: “All I did was tell stories of the folks I grew up with, worked with, and raised hell with,” he explains. There was a lot of laughter, which is always the case with Terry Tyler.

He shares those stories in his three published books: ‘Don’t Scratch Too Deep,’ ‘Woodchip Chronicles’ and ‘Woodchucks, Wingnuts & Dipsticks’. He also occasionally delights audiences with tales that are by turns quaint, ribald or wildly funny. And he’s the author of a number of booklets on Dorset history. 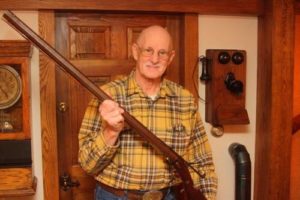 One of his favorite topics, perhaps, is his collection of antique Vermont-made firearms. He even wrote the definitive guide with co-author Harry Philips, titled ‘Vermont’s Gunsmiths and Gunmakers.’ In 2011, the Shelburne Museum offered to purchase the collection – 107 beautifully crafted works of art – where they are on view to the public in a namesake exhibit.

He continues to be industrious even as he approaches his 89th year. He’s currently working on two more history booklets. When asked if there was anything he hasn’t done, Tyler chuckled. “My mother used to say, ‘You better slow down or you’re gonna meet yourself coming back.’”