The Gilbert Clan – From Here and Back Again 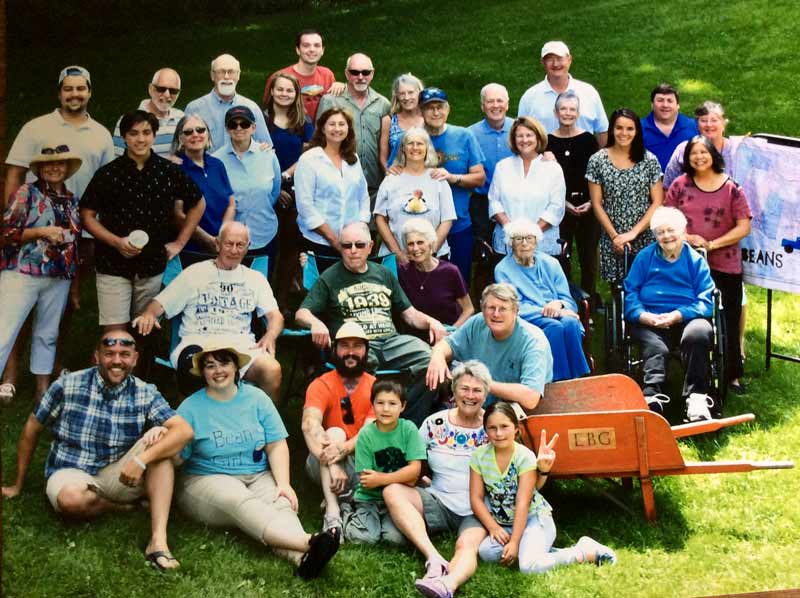 The Gilbert family has a very large presence in the story of Dorset. It began when they migrated from Cavendish in the 1850s, most likely enduring the 42-mile journey by oxcart or horse over rough roads through what must have been rather treacherous terrain. When they arrived to this beautiful valley, they must have felt that they’d arrived in paradise. Over the ensuing years the family and its holdings grew. A lot. There are 52 gravesites in Maple Hill Cemetery with the name of Gilbert, and their numerous progeny have, over the years, come to live in places as far away as California and Alaska.

When asked recently about his family, Jack Gilbert pauses. “Well,” he said, “You need to start way back. You had three brothers who came to Dorset. Each had a farm on West Road, and each had large families. As my grandfather (Rufus Stuart Gilbert, 1889-1980) used to say, ‘It sure is complicated when you sit down and think about it.’”

The clan settled on and farmed both sides of West Road; the area was colloquially called ‘Gilbertville’ around the turn of the last century. They had apple orchards, raised berries, grew potatoes, and bred poultry, sheep, pigs and goats. As generations grew, some stayed, some moved away, others returned.

Among those who remained was Huntington Pratt Gilbert (1876 – 1962) who ran a huge poultry farm with his sister Anna’s help; by 1904, they were producing 1000 eggs a day. ‘Hunt’ was also an avid and prolific photographer; upon his death, Anna gave the Dorset Historical Society hundreds of his negatives, which depict everyday life in Dorset. The adjacent picture was taken in 1913 and is titled “Wilfred and the Basket” 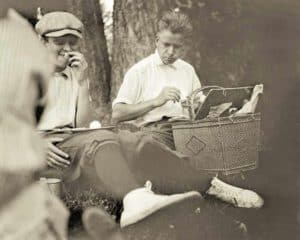 His cousin Alfred Holley Gilbert (1878-1977), founder of the Dorset Historical Society, taught agriculture and botany in Kentucky and later in Burlington before returning to Dorset in 1956.

Walter Gilbert, who now lives in the house his great grandfather built in 1898, grew up in Kansas City. “There’s as much of Dorset in me as anything else, I guess,” he says. He fondly recalls the yearly trips his parents and siblings made to Dorset when he was a boy. “We were summer visitors then.” Strongest in his memory are the outings they took with aunts, uncles and cousins. “Oh, I just loved it. It was all open and you had the ability to wander around.” West Road was not paved then, he recalls. They would explore the area between Gilbert and Goodman Brooks on family picnics and would hike and climb the mountains in the area – a whole big group of them. 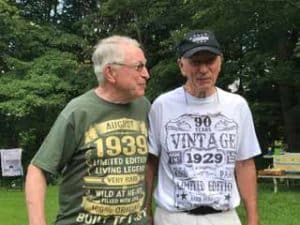 Art Gilbert, Walt’s brother, is a retired geologist who spent nearly two years researching and constructing one of the Historical Society’s most popular exhibits on the history of Dorset’s marble industry. He has been instrumental in expanding the Town Forest to include the Gettysburg Quarry, and for many years coordinated Green Up Day in the town.

An interest in natural science must run in the family. Their grandfather, George Holley Gilbert, (1854-1930) was “a bit of an orchardist,” recalls Walt. “He enjoyed experimenting with apple trees, and had maybe 50.” George also started the Dorset Natural Science Club, which built the Dorset Trail in the 1920s. Now known as the Town Forest Trail, it features the Gilbert Lookout with views of the distant Adirondack Mountains.

By the early 1970s, there were probably more Gilberts dispersed throughout the country than there were those in Dorset. Those who stayed put enjoyed frequent family gatherings. It was at one of these casual get-togethers that an interesting recipe sparked what has since become a 45-year tradition for the family. Walt and Art’s father, Arthur Gilbert, had recently read an article about baked beans cooked in the ground, and the gang was keen to try it. According to Walt, a fire is built in a metal-lined hole in the ground on Saturday night the first weekend in August. This celebratory affair is fueled by toasted marshmallows and the moderate consumption of libations as the party enjoys a roaring bonfire, and culminates in the lowering of the bean pot once the fire has turned to embers. The beans bake overnight, and around midday on Sunday, everyone reconvenes for a picnic. The very first Gilbert ‘Beanhole’ held in the summer of 1974 attracted perhaps a dozen participants. “It kind of exploded in the 80s,” recalls Jack, becoming a sort of family reunion, attracting 30 or more folks from all over. The event continues to this day, with a different host each year.

Jack, who is chef/owner of Gringo Jack’s in Manchester, spent his childhood in Ohio. His family came here every summer, and when his parents divorced, his father returned to his hometown. Jack joined him at age 16 to attend BBA before heading west for art school, and then “lots of places in between.” He spent 20 years or so in New York City before Dorset beckoned his return. “Now there’s a little bit of feeling like there was in the 60s … you’re more focused on your home life and your home,” he remarked.

Jack’s ancestors of 150 or so years ago would be surprised to see how much Dorset’s ‘Gilbertville’ has changed since their day. Much of the farmland on West Road – now paved – has since yielded to further settlement and more houses. But they’d recognize the old homesteads, see traces of their old orchards – and most of all, witness that their intrepid spirit and strong family connections remain, despite the distance of time and place.