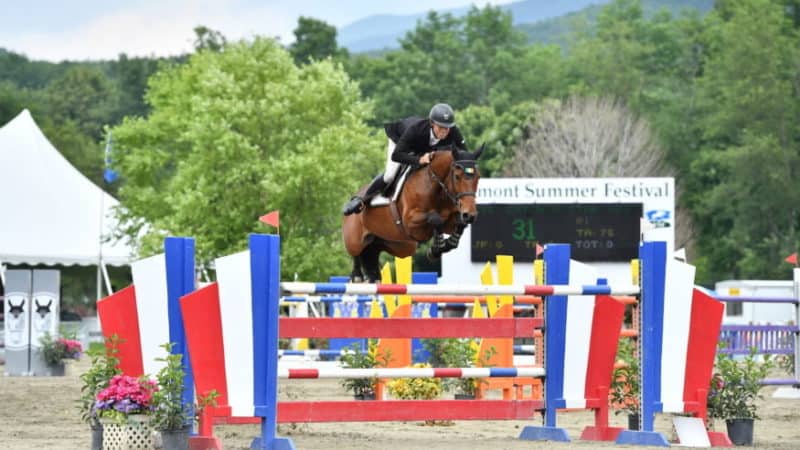 When the weather warms and the days get longer, thousands of visitors flock to Herald Beebe Farm in East Dorset with their four-legged friends – and we’re not talking about dogs.

For six weeks every July and August, top equestrians from all corners of the world call Manchester and the Mountains home during the Vermont Summer Festival, which celebrated its 26th season in 2019. The festival provides the perfect backdrop for competitors to showcase their skills in Hunter, Jumper, and Equitation categories. In addition to being New England’s largest hunter and jumper competition – designed by internationally recognized course designers – the Vermont Summer Festival has charmed visitors and locals alike for the last two decades, providing endless reasons to come back year after year.

For one, you can’t beat the views. Located just off scenic Route 7, Harold Beebe Farm is about as idyllic and picturesque as old farms come. Think big red barn, sprawling meadows, and breathtaking views of the hills of Southern Vermont that are truly second to none.

The competition itself is family friendly. Despite all that is at stake for riders – winners take away tens of thousands of dollars in prize money – the atmosphere remains welcoming and fun. Dozens of large blue and white pop-up tents transform into a small city, of sorts, and the insides begin to look less like stables and start to feel more like a hotel, where the guests are always happy to see you, even if they do stomp their feet impatiently when breakfast isn’t on time. In addition to riders and their families, another cast of characters joins them at the event, including vets, groomers, trainers, and, yes, even mane and tail braiders.

And while we’re talking about community: For the 2019 season, all the profits collected at the gate from spectators benefit local nonprofit organizations, including The Dorset School, Dorset Equine Rescue, and Manchester Community Library.

The Vermont Summer Festival has put East Dorset on the map as a popular summer destination. The show was started by owners John Ammerman – a member of the Show Juming Hall of Fame – and his wife, Dotty, and was set up in the parking lot of Killington Resort, located an hour northeast of the current location. It lasted just two weeks and had just 200 stalls and two competition rings. For the next few years, the show traveled to different areas but continued to grow, eventually becoming a three-week event, then a five-week event. Then, the Vermont Summer Festival took root in East Dorset and hasn’t left since, growing to more than 1,200 stalls and five competition rings with six weeks of competition.

If you missed this year’s Vermont Summer Festival, don’t worry. We’re already counting down the days until it returns next year.